The King Salmon is correctly referred to as Chinook, but others call it Tyee, Chub, Hook Bill (for males), Winter Salmon, and Blackmouth. Whatever it is called,we all enjoy king salmon fishing.It is an anadromous fish, meaning it makes regular migrations whether daily or annual with distance ranging from several meters to a thousand.

The king salmon typically have blue green hue with silvery sides. From juvenile and entering the ocean habitat it changes hues, first from dark blotched green then to dark blue green. But how did the King Salmon earned the name “King”? 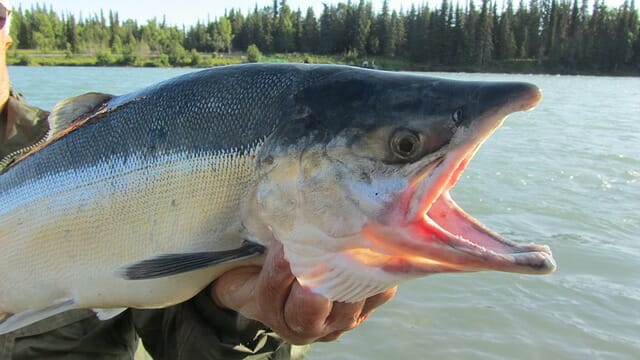 This has made Alaska known all over the world, though other places have their share of fame when it comes to king salmon fishing. Many fishing professionals and sport anglers alike come to Alaska in hope of catching king salmon, spring salmon, or Chinook salmon, however you call it.

What makes king salmon fishing very challenging is that they are the biggest of their kind, which is Pacific salmon, hence called king salmon! The Alaska king salmon spend between 2-5 years in the ocean, therefore their size greatly varies.

The average size of salmon in Alaska is about 20 pounds, although king salmon in Kenai River normally weigh within 50-pound range. If you happen to spend your fishing trip in Alaska, you’ll notice that no other types of salmon draw as much attention as king salmon do, which happen to be the official State Fish of Alaska.

The Kenai River is the only place to catch trophy-class King Salmon and is home to the all-time sport-caught world record. This stunning glacier-fed stream has produced ten (10) of the largest King Salmon ever captured for sport.

You won’t find the opportunity to catch such enormous trophy-size King Salmon anywhere else in Alaska or the entire world.This strain of King salmon is unique in the entire world in terms of genetics.

Since this is a true trophy fishery, you come here to fish for the chance of a lifetime rather than the quality of hookups or action. The next world record will be set on the mighty Kenai River right here. The biggest salmon of your life can be caught here!

Beginning in the first week of May, these enormous fish begin to reach the Kenai River. One world record king salmon was actually caught on May 17th, 1985, however consistent action can be expected around May 15th.

There are two different huge king runs. The first run typically takes place from May 15 to June 30 and the second run from July 1 to July 31. Fish in the 70-lb range were caught during the 2017 King Salmon season on the Kenai River, which ran from May to July.

You would normally fish on a charter on the Kenai River with a total of four other anglers, including yourself, in addition to your guide. Our 20-foot Predator and AlumaWeld river boats, powered by Yamaha four-stroke technology and built to fish the Northwest’s rivers, can accommodate a party of five people in great comfort.

While typically averaging 10 to 50 pounds, some King Salmon could very well exceed 100 pounds. The first world record for the King Salmon was 126 pounds, a commercial catch near Petersburg Alaska.

A more subsequent effort was made by Mr. Lester Anderson, and he caught a 97 pounds King Salmon over at Kenai River in 1985. Immediately after that event, thousands of anglers, pros and regulars now clamored up on boat expeditions and charters bound to Alaska’s fishing grounds to try their luck and mettle on landing a 100 pounder King.

King Salmon deserved to be called “The King”; it doesn’t easily. As soon as it senses the line it won’t give slack. At most it will try to circle or even go berserk often seizing the rod away from astonished anglers who thought they can manhandle the King.

And of course, Alaska is still the best place for any King Salmon fishing, guarantees always a rewarding trip. 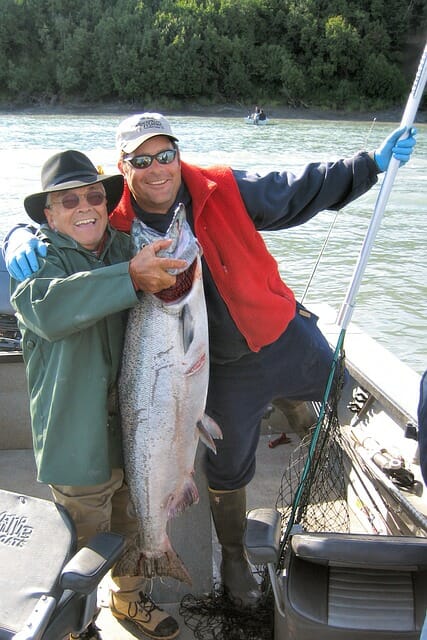 So where to you start for your Alaska King Salmon fishing? I suggest heading out to the Waterfall Resort. There they hold the Annual $100,000 King of Kings Salmon Tournament. You might join in this tournament if you are interested in King Salmon fishing.

Or you might get some helpful pointers on landing yourself a catch. Most pros head here just to take part on the annual competition. This competition however is only available to guests of the resort.

There are also other venues where you can get a healthy Alaska king salmon fishing atmosphere. Like at the Alaska Rainbow Lodge at Bristol Bay.

Its one of the premier fishing lodges in Alaska and it doesn’t take you far away to those fishing grounds you seek. Or if you wish you can directly book at the riverside cabins along the Kenai River at Sterling.

Now that is personalized Alaska King Salmon fishing adventure, with the fishing grounds right at your doorstep.A network of waterways, often a lake and river system, is what is commonly referred to as the Bristol Bay region.

Anglers from all over the world come here to fish in style because of the area’s legendary trophy trout population and its tens of millions of sockeye salmon runs. In Bristol Bay, the first kingfishers are typically spotted in early to mid-June.

By the first two weeks of July, the runs gain up speed, and by the end of the month, they have tapered down. In contrast to many of the creeks that fishermen target throughout Alaska, the majority of the Bristol Bay drainages remain crystal pure and unaffected by glaciation.

As you attempt to cast your bait in front of the salmon that is plainly visible through your polarised lenses and is the size of a log, this makes for an even more heart-pounding adventure.

The Nushagak, Togiak, Alagnak, and Naknek are some of the primary rivers where fishermen travel to catch Chinook for the purposes of this article. This page is not intended to be exhaustive; rather, it serves as a useful starting point for determining which major drainage best meets your needs. 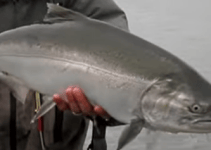