When learning fly tying for beginners, a vise is the first item that you absolutely must have. As you attach materials and assemble your fly, the vice is what keeps the bare hook in place. There are two primary categories of vises: pedestal vises, which link the vice to a substantial base and enable quick assembly practically anyplace.

The second is a c-clamp vise that is attached to a table or desk ledge. Even though C-clamp vises are less adaptable than pedestal vises, they offer better stability and simpler height changes.

A bobbin is yet another necessary item. To make wraps and apply materials, bobbins are utilised to hold the thread firmly in place. By means of two movable metal arms, bobbins secure the thread.

These metal arms’ rounded ends enable the thread spool to be secured in the bobbin while being free enough for you to wind or unwind thread as you tie. Easy and accurate placement is made possible by the thread’s ability to enter and leave a thin metal tube. 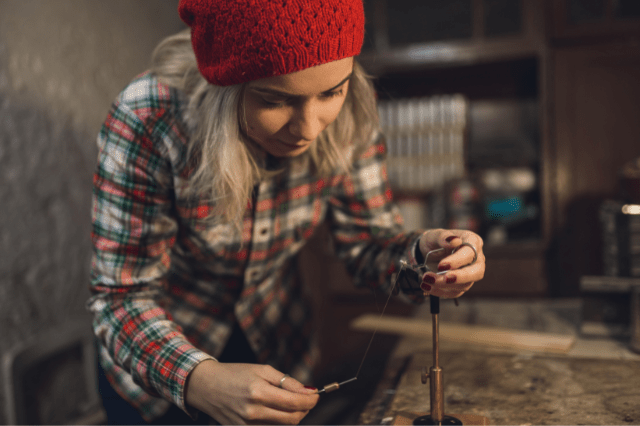 Do I require particular scissors?

Yes. It is necessary to use specialised fly tying scissors to cut thread and other materials.A decent pair of tying scissors should be easy to grip while still being compact, accurate, and sharp to cut off fabric in awkward locations. Kitchen shears of the ordinary calibre won’t cut it.

You’ll probably end up with several pairs of scissors over time. Backups are something you get as you upgrade. Cutting wire with backups helps preserve the blades on your more recent primary tying scissors. 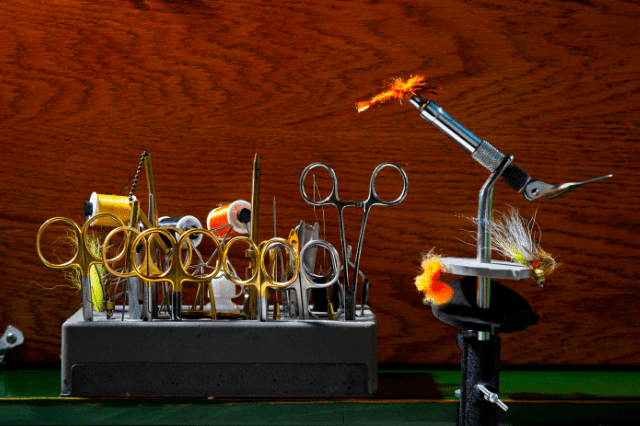 A slender metal stick with a point on the end is simply known as a “bodkin” in fancy use. After you have tied off the thread on the finished fly, the Bodkin’s function is to add head cement. For some flies, Bodkins can also be helpful when applying various resins and epoxies.

A half hitch tool, which consists of a metal tube with a hole on the end large enough to accommodate the eye of the hook, enables the user to tie off their thread quickly and effortlessly. The tubing is wrapped in thread, making it simple to tie half-hitch knots to complete the fly.

As an alternative, most beginner tying packages frequently include a whip finish tool. The learning curve for this instrument is steeper, but once mastered, it produces stronger, longer-lasting knots.

Overall, learning the half hitch and/or the whip finish tool is possible, but knowing how to tie off your thread without using them could be advantageous.

As was before explained, head cement is used to adhere the thread to the fly’s final knot. A tiny drop or two of quickly drying head cement adds an extra layer of defence against your knot unravelling or breaking.

To attach dubbing, wax is smeared into the thread to provide a sticky finish. Wax is not necessary because your hands’ natural oils may provide enough moisture for the dubbing to stick. Wax may be more crucial and required if you have dry hands in order to apply a consistent layer of dubbing to the thread.

After going over the fundamental equipment, let’s look at some basic materials to help you tie your first few flies.

Purchasing a kit of supplies is problematic because some are of poor quality. Having said that, there are several excellent ones, and they each offer benefits. For additional information, look into fly tying kits. 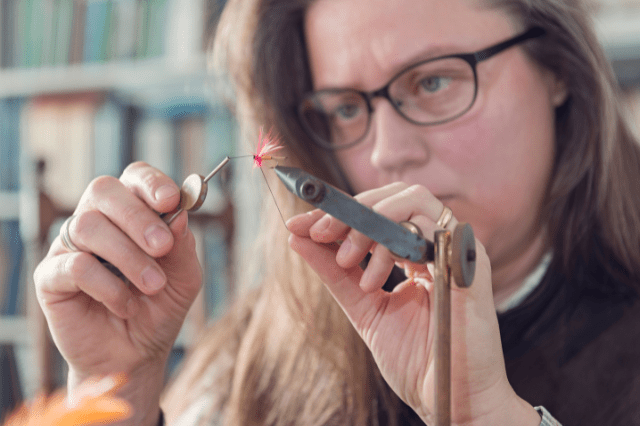 Hooks are the first thing you’ll need. You won’t have the base you need to attach things without the hook. Because there are so many different sizes and designs of hooks, choosing the proper one can be challenging. We advise using size 12, 14, or 16 nymph hooks for beginners learning to tie some of these fundamental flies.

The materials are all attached to the hook with thread.There are many different colours and widths of thread. The 6/0 thread width is the industry standard. A prefered thread size for smaller flies like PMDs or Tricos is 8/0.

Thicker thread, like 3/0, is needed for larger flies like streamers or large stoneflies.We’ll stick to black, brown/tan, and red thread in size 6/0 for fly tying for novices even though thread comes in just about any colour you can imagine. This is sufficient to get you going. 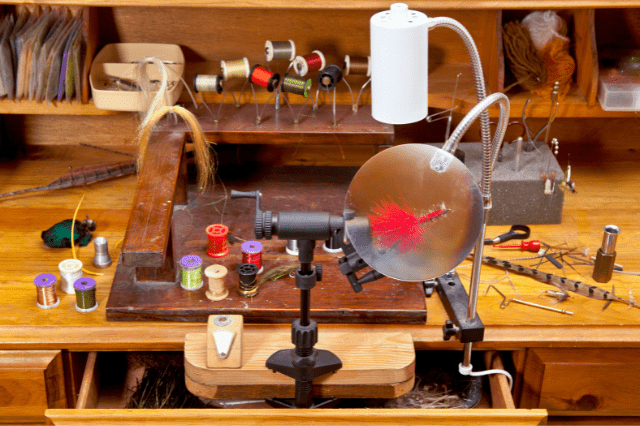 To mimic the segmented or ribbed abdomen that many nymphs have, wire is frequently utilised in tying. Additionally, it gives the fly useful weight and shiney flashes. Similar to thread, the wire is available in a number of colours and diameters, but for starters, fine copper wire will do.

Beads The use of beads on flies has grown in favour over the past 20 years, and some anglers will only use beaded nymphs. Beads provide the fly the necessary weight while simulating the nymph’s head.

Gold, silver, and brass are the typical colours of beads, which are typically made of brass or tungsten, though it is also possible to get beads in more vivid hues like pink or green. A gold bead in size 3/32 will work for beginner flies.

Many flies are made primarily of dubbing. Although it mostly consists of synthetic nylon strands, natural mixtures like hare’s ear are also available.

Depending on the aesthetic you’re going for, dubbing can range in texture from silky to gritty. The dubbing will rest on the hook flatter and more levelly the smoother it is. A “fuzzier” appearance and less consistent application will result from coarser dubbing.

Dubbing comes in a variety of hues and can be blended with other colours to create a distinctive appearance. Grey hare’s ear, tan, and caddis green dubbing will do for the time being.

The majority of the fly’s pheasant tail is named after one of the most well-known flies, the pheasant tail nymph. Tails, bodies, and wing casings are frequently made from pheasant tails.

Since its small strands give the fly a realistic appearance and modest movement to simulate aquatic insects, pheasant tail is still a common fly material. The majority of fly shops sell cut-piece packets or individual feathers.